It’s All In The Name

When President and Founder Blair Keith went to incorporate his company in 2008, he named it after his dog Chase and the number on his hockey jersey, 14.

“Chase was a dog who had a ton of personality. She never gave up, would just run and run…even after breaking both legs and having one of them amputated – she still kept going! She was loyal and hardworking; traits I think are of foundational importance to my company today.”

When asked about the significance of his hockey number, Blair says, “Growing up in Saskatchewan, you’re practically born with a stick in your hand. They say our province produces the most professional hockey players per capita in North America. It’s a constant. We practice, we play games indoors and outdoors, we play shinny in the off season…that quality, commitment and dedication are also a part of who we are here at Chase 14.”

Blair started doing business deals by handshake, and is known for keeping his word, no matter what. This honour and integrity continue in the company today.

“For us, it’s about people. And it’s about the quality of the relationship. Chase 14 stands behind what we do. We want our clients to trust that we don’t rest until we’re all satisfied. Clients never remember the mistake. They remember how you handled it, and at Chase, we’re dedicated to handling it right. We dig in, we roll up our sleeves and do what’s needed to get the job done.” 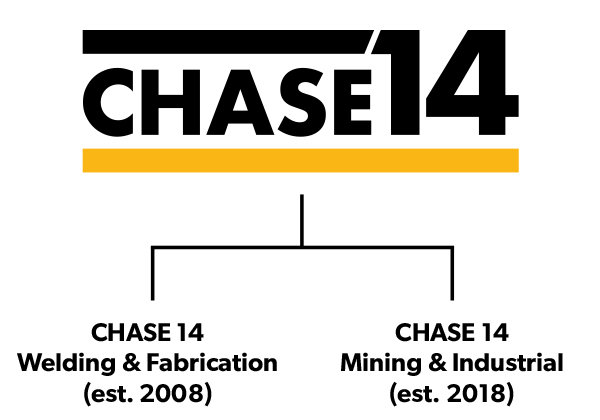 Chase 14 was established as a welding maintenance and construction company in 2008. While the company initially focused on delivering services to Saskatchewan’s agriculture sector, it soon moved into the mining and industrial sectors, with an established team of welders, millwrights, machinists, fabricators, installers and erectors. A fabrication shop was established in order to meet the demand for custom solutions. In 2018, Chase 14 opened Chase14 Mining & Industrial, bringing together an expert team of consultants and project, construction and maintenance managers with international experience. The Chase 14 Mining & Industrial crew increases the company’s capacity for specialized services. The team now provides services to grain and malt, mining and milling operations across Canada.

We are a team of problem solvers continually focused on providing the safest, most economical and high quality solutions to meet the goals of our clients. We understand operations and work with clients to maximize their production schedules and minimize downtime. At Chase 14, we measure our success by that of our clients and invest in building a culture that continually asks “What is the best we can do today?”

Chase 14 Mining & Industrial is 51% Aboriginally-owned. At projects supported by Impact Benefit and other Collaboration Agreements and MOUs, we work with clients to meet commitments and enhance relationships with a commitment to developing a strong understanding of the agreements, and of the unique aspects of affected Aboriginal communities.

We know that our clients are dedicated to building more inclusive supply chains and to increasing spending with Aboriginal suppliers. We share these values and believe in partnership whenever possible.

Chase 14 is committed to developing a representative workforce and has dedicated training policies to ensure opportunity and advancement for all of our employees.

About the new logo

The new Chase 14 logo is a reflection of our core values. It is inspired by the H beam, used for its strength, integrity, and ability to withstand great force. Our colours are inspired by Chase 14 founder Blair Keith’s original hockey jersey, part of the inspiration behind our name. The gold is also a reflection of our Saskatchewan roots, and our commitment to hard work and strong relationships built on trust and respect.